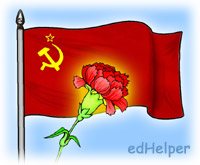 Reading Comprehension for May 9

Many years ago during the first half of the 20th century, there was a terrible problem in Europe. Beginning in the 1930s, a political party known as the Nazi Party took power in Germany. A man named Adolf Hitler led the Nazi Party.

After Germany was defeated in World War I in 1918, daily life got very bad. Germans were poor, and the economy was depressed. Hitler and the Nazis wanted to improve German life. Hitler did this by building pride in Germany. He also made many groups of people "enemies" of Germany. In fact, anyone who wasn't a white-skinned German of the Aryan race was an enemy. Jews were singled out as one of the greatest enemies of Germany.

Soviets, too, were enemies of Hitler's Germany. On June 22, 1941, Germany invaded the Soviet Union (an area made up of Russia and many surrounding countries). This brought the Soviet Union and Germany to war. Germany and its allies were called the Axis Powers. The Axis countries were already at war in Eastern Europe in what is called World War II. Soon the U.S. would enter the war. For four very long years, the Germans and the Axis Powers fought Russia and its allies. Many people were killed in World War II. In the Soviet Union alone, it is thought that almost 20 million people were killed during this war.