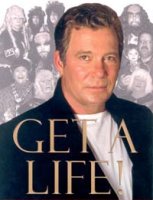 William Shatner: Get a Life!

William (Bill) Shatner was born to Canadian parents of Jewish descent in Montreal, Quebec, on March 22, 1931. He studied economics at McGill University. During summers he performed with the Royal Mount Theater Company and then with the National Repertory Theater in the country's capital after he graduated. He also performed at the acclaimed Stratford Shakespeare Festival of Canada before moving to the U.S. to get more work.

In 1954, Shatner was cast as "Ranger Bob" on The Canadian Howdy Doody Show, but his first feature film role was as the youngest brother in The Brothers Karamazov (1958) with Yul Brynner.

Shatner married Gloria Rand in 1956. They had three daughters together: Leslie, Lisabeth, and Melanie.

During the 1960s, he began to get better parts. He had a part in Judgment at Nuremburg and starred in Roger Corman's award winning movie, The Intruder (1962). He also appeared in several TV shows, including two Twilight Zone episodes.

In 1966, Shatner was cast as James T. Kirk, captain of the Enterprise, in the new series, Star Trek. It was a part he played for three seasons and is perhaps best known for. It never did well in the ratings and was cancelled in 1969. It went on to build a cult following in syndication.