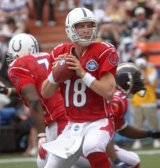 Are people born to do certain things? Some people believe that is true. Peyton Manning may be one of those people.

Peyton Manning was born on March 26, 1976. He was born in New Orleans, Louisiana. Peyton's parents are Archie and Olivia Manning. Archie was a football player. He was a star player in college. He went to the University of Mississippi. Archie was a quarterback. The quarterback is in charge of the team. He calls plays when his team has the ball. Archie went on to play in the NFL. The NFL is the National Football League. Peyton was a large baby when he was born. Many people said he would be a lineman for a football team. Peyton is the second child in his family. He has an older brother. His name is Cooper. He has a younger brother. His name is Eli.

Peyton Manning started playing football when he was three years old. He played with his older brother. Sports were important to his family. All of the Manning boys played football. Cooper was going to play football in college. But there was a problem with his back. Cooper Manning was diagnosed with spinal stenosis, a narrowing of the spine. Doctors told him he would not be able to play football again.