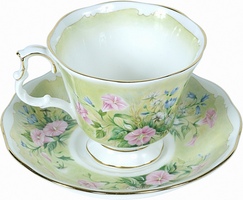 Every week, Jacob went to his aunt's house. He liked going there. There was always a lot to do. Aunt Rose let him watch the television programs he liked. She had lots of toys for him. She had a big yard for when he wanted to be outside.

But there was something that bothered him. Aunt Rose had lots of very old things. She didn't like for him to touch them. Jacob didn't understand why. Most of the stuff looked like old junk to him.

One time he was playing inside. He accidentally broke a plate. His aunt was very upset. She told him that the plate was an antique.

Jacob still did not understand why Aunt Rose was so upset. He had some old toys at home. He didn't think he would be all that upset if someone accidentally broke one of his toys.

"Aunt Rose, why was that plate so important to you?" he asked. "I am sorry I broke it, but it was just an old plate."

Jacob's aunt explained to him why the plate meant so much to her. "This plate is sixty years old," she said.

"Yes. It belonged to your grandmother when she was a little girl," Aunt Rose said.