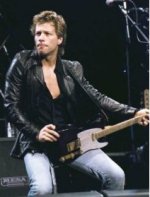 Frenzied flashes of light crisscross the stage. Music pounds. In ragged jeans, the lead singer leaps and whirls across the stage. His hair lashes his face. He holds the mike out to the screaming crowd and leads them in one last chorus. The music thunders to an end. Members of the band bound to center stage and take a bow. A fiery blaze of lights follows them offstage. Then, the stage goes dark. The concert is over.

Where does a rock star go when the concert ends? If the star is Jon Bon Jovi, he goes home to his wife and children. He and wife Dorothea Hurley have four kids. The oldest, Stephanie Rose, was born in 1993. Jesse James came along in 1995. Jacob was born in 2002. The youngest, Romeo Jon, made his entrance in 2004.

Can a screaming, head-banging rocker be a good dad? Jon Bon Jovi thinks so. Being the leader of a hot rock group means lots of traveling on tour. In the past, Jon was gone from home for much of each year. Now, his home life is very important to him. He still tours with his group, Bon Jovi, but he plans time in each tour to come home. He tries not to miss holidays or important family events.

Dressed in black leather, Papa Bon Jovi attended his daughter Stephanie's school play. Getting there had been a scramble. Dashing from a meeting, the rocker roared out of the driveway in his black Dodge Viper. He wheeled into the school parking lot and raced inside just in time for the opening curtain. "For too many years," he says, "there were too many plays I missed when I was on the road. I just couldn't miss one more."