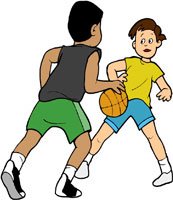 Me, Read the Newspaper?

Alvaro dribbled the basketball around Sam and took a shot. It went through the net, and Sam grabbed the rebound, dribbling it back to center court. He took a shot and missed.

"Whew! Time for a break," said Sam, wiping his brow.

"I could use a drink of water," said Alvaro.

The boys walked over to a cooler on the sidelines. Sam and Alvaro each grabbed a bottle of water and sat down on a nearby bench.

"We were tied. You missed the last shot. That means I win!" said Alvaro, taking a long gulp of water.

Sam thought for a minute and added up the points in his head. "I guess you're right. Do you want to play another round?"

"No, I need to get home," said Alvaro. "I have to read the newspaper."

Sam looked confused. "You need to go home to read the newspaper?"

Alvaro took another drink of water and swallowed. "Yeah, it's my homework."