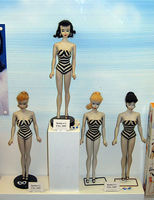 Barbie dolls are popular toys. Did you know Barbie was named for a real-life girl?

Ruth Handler invented the Barbie doll. Ruth named the doll for her daughter, Barbara. When Barbara Handler was a pre-teenager, her mother noticed that she no longer played with baby dolls. Instead, Barbara liked to cut out pictures of young women from magazines. She played with the cut-outs as if they were dolls. She liked their stylish clothes, hair, and makeup. Barbara liked to pretend the cut-outs were doing things she dreamed of doing when she became a grown up.

Most dolls in the 1950s were baby dolls. Barbara's mother decided that other girls might like dolls that were not babies. She wanted to give girls other choices. They could play pretend with a doll that looked grown up. She decided to make one.