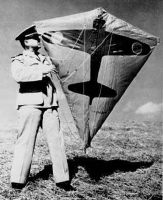 The Kite that Served the Navy

Note: This is a dramatization of a true story.

The men on the USS Block Island were having a good laugh at naval officer Paul E. Garber's expense. An odd idea struck Lieutenant Commander Garber while he stood on the deck and watched the gunners shoot at puffs of smoke for target practice. After rounding up sailcloth, line, and light sticks, he had begun to construct a kite.

"Where does he think he is - a playground somewhere?" snickered one man.

"This is unbelievable! We're in a war, and Garber wants to play games?! He must have entered his second childhood!" another said, holding his sides.

"Wait till I tell my wife about this!" a third one said. "The Navy is going after the Japanese with attack-kites! That'll teach 'em not to bomb us again. Hoo-boy!"

Garber, who had been flying kites since he was five years old, ignored the ribbing. He understood how it must look to see an officer in his forties fooling around with a kite. However, he didn't get to be that age without learning a few things about this children's toy. If his idea worked, the laughter would stop.

Finally, the kite was airborne. The men continued to stand around and crack jokes while Lieutenant Commander Garber let out the kite string until the kite was about 250 yards away from the ship. It was a diamond in the sky. It had no tail, two control lines, and a rudder arrangement for steering. The kite could imitate many airplane maneuvers. As the men watched, it seemed about the size of an attacking plane in the distance.

"All right, fellas," Garber challenged them. "Let's see if you can bring this baby down!"

The anti-aircraft gunners moved into position and began to shoot at the kite. Garber's evasive tactics were superb, and the men found out how much practice they needed at hitting a moving target. Finally, someone hit the kite, and it fell into the ocean. All the resulting cheering and back-slapping caught the attention of the carrier skipper.