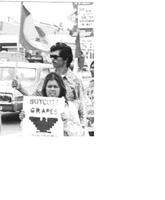 The Life of Cesar Chavez, Part 4

Cesar Chavez remembered Mohandas Gandhi's peaceful march to the sea. Gandhi led eighty people on a twenty-four day march in 1930 to protest a British tax on the people of India. It was a form of nonviolent protest that got results.

Cesar organized a march with 67 other union members. They walked 340 miles from Delano to Sacramento, California, in March 1966. More people joined along the way. Reporters and film crews followed them. They saw how farm workers lived. They saw the poor shacks in the migrant camps. People across the country saw pictures of where migrant workers lived and learned how little they were paid. The march swelled from 68 to 5,000 people. The growers decided to make a deal. It seemed Cesar Chavez and the marchers had won!

Strikers were treated badly. Growers threatened them. Many strikers were hurt. Children as young as six were used as strike breakers. They were hired to do the work of the striking workers for even less money! Cesar Chavez was afraid that the strikers would become violent. He decided to go on a hunger strike. He went without food for twenty-five days in 1968. He did this to remind people of Gandhi's nonviolent way of bringing about social change.

By 1969, the grape boycott had reached Europe. Workers in other labor unions refused to unload California grapes from ships. The growers didn't like the public attention. Grape growers lost millions of dollars as grapes rotted. Finally twenty-three growers agreed to accept the union's demands. The strikes ended on July 20, 1970, after five long years.