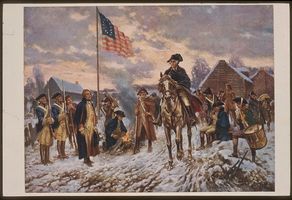 What Is a Sacrifice?

Mr. Dan loved history and avidly read American history books. He also liked unusual holidays, and as a school teacher, he tried to celebrate one unusual holiday each month. On this particularly cold March day, he wrote a list on the blackboard for his class to read as each student came in the door. He had an idea that would combine his two hobbies into one spectacular lesson for his sixth grade class!

"Give up your cell phone for one day," read one student. "Why would I want to do that, Mr. Dan?"

"Don't watch television for one evening," said another. "Why would I want to do that, Mr. Dan?"

"Don't eat anything sweet for one day," said a third student. "That would not be much fun, Mr. Dan."

Mr. Dan just smiled as the students took their seats.

"These are not things you have to do, but if you want to, you can pick one item from the list and try it. I want all of you to make one small sacrifice in honor of a special day on March 18. It is called Supreme Sacrifice Day. I tried to suggest some sacrifices for you, but if you have a better idea, you can do that," said Mr. Dan. "This assignment is optional, but I hope you might want to try it. I'll check back with you in a week about this. "

A week later, Mr. Dan asked his students if any of them had tried the experiment. Several students raised their hands. He asked them to share their experiences.

"I didn't watch my favorite show one night. I did tape it, though, so I could watch it later. Does that count?" asked Beth.

"You have to decide about that one," said Mr. Dan. "You have to ask yourself one question: what is a sacrifice?"