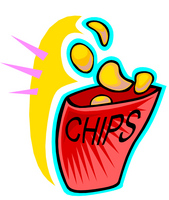 Chipper had been sitting on the grocery store shelf for three days. While he enjoyed being on the shelf instead of in a box, he was still lonely. From the time he came off the manufacturing line and was sealed into a bright red bag with "plain potato chips" imprinted on it, he had wanted to be around more humans. At least while he was being processed at the plant, he had seen human beings every few feet. They kept an eye on the conveyer belt, separated the chips before they went into the fryer, and made sure all the chips made it into storage bags. Chipper had enjoyed seeing their faces as he cruised by. Now, he was sealed in a bag with a bunch of other chips and stuck on a shelf. It had been a long, bumpy ride to get here, and now he was getting bored!

Meanwhile, Mrs. Jones scanned the shelf holding all the chips. She was doing last-minute shopping for a birthday party for her son, who was turning eighteen in two weeks. She had a big surprise party planned for him tonight at the clubhouse in their subdivision.

"I wonder what type of chips I should get?" Mrs. Jones thought. "There are so many varieties -- barbeque, sour cream and chive, cheddar -- maybe I should get one of each!"

Chipper straightened in the bag. He tried to get his companions to straighten, too.

"Psst," he said to the other chips that lazed around haphazardly in the bag. "This shopper is looking for chips. Let's get her attention!"

The chips all sat up straight, causing the bag to plump up.

Mrs. Jones noticed the full bag a moment later. "This bag looks pretty full," she thought, and she grabbed it by the top corner. The chips inside tumbled over each other as Mrs. Jones tossed the bag into her shopping cart.

Chipper whispered to his friends, "Great job, guys. Now we'll get out of this boring store!"

"Yea!" said Leroy, a chip in the middle of the bag.