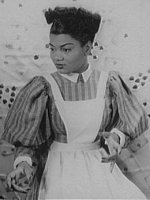 A Pearl to Behold: Pearl Bailey

A pearl is one of nature's most precious jewels. Each pearl is unique and special. One pearl was born on March 29, 1918. Pearl Mae Bailey was born on this date in Newport News, Virginia. Her parents were Reverend Joseph and Ella Mae Bailey. She also had an older brother named Bill. Shortly after she was born, her family moved to Washington, D.C. The family then moved to Philadelphia, Pennsylvania. She started singing when she was three years old.

Bailey's brother was the one who introduced her to the stage. When Bill began his tap dancing career, he convinced Bailey to enter an amateur contest. She took his advice. At 15 years old, Bailey made her singing debut at the Pearl Theater in Philadelphia. Her reward was first prize! Afterwards she traveled to Harlem, New York. She entered and won another contest at the famous Apollo Theater. After winning these contests, Bailey decided to become a professional singer.

During the 1930s, Bailey spent her time in Philadelphia singing and dancing in black night clubs. She started traveling along the East Coast and performing in other night clubs. As World War II was beginning, Bailey started touring with the USO in 1941. The USO had singers, dancers, and other performers who toured the United States. They performed for American soldiers who were preparing for war.