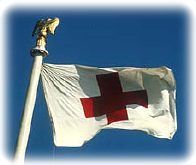 Appreciation for the Red Cross

I'll remember those days for as long as I live. They were some of the most unsettling days of my life. However, in a strange sort of way, they were also some of the best.

My father tuned on the television and radio to keep up with the latest broadcasts. We all heard the warning at the same time. "Hurricane Edna is advancing toward the southeast at a rate of 75 miles per hour. Residents from Longley Beach down to Cape Sassafras are urged to evacuate immediately."

"Let's go," Dad called urgently. "We're getting out of here."

For two days, Dad had been affixing boards across windows and putting sandbags along the foundation of the house. Mom gathered bottled water and non-perishable food, blankets, and extra clothing. My sister, brother, and I each packed an emergency bag. My heart was racing. We had learned to be ready for bad weather, but we had never had to actually leave the house before. I was excited and nervous.

We had left our things in the foyer, so when Dad gave the call, we immediately ran there. Grabbing our bags, we headed out to the car and piled in. "This is not a drill, kids. A hurricane can do terrible damage. Let's just pray our home will not be destroyed."

I said a silent prayer as Dad wheeled out onto the street into a traffic jam. It looked as if everyone else had heard the warning at the same time.

Dad listened to the radio as the announcer kept everyone informed. "Red Cross shelters are available in the following towns..." the man called out. Dad decided we would try to get to one in the upper part of the state.

"The Red Cross is a service organization," Dad began to explain. "They help people all over the country during times of disaster. They prepare during peaceful times by taking blood donations, keeping supplies, and training people to know what to do in case of emergency. They set up shelters in churches and schools so people who have to leave their homes have a place to stay."