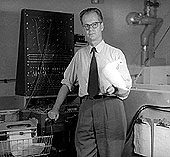 Does your teacher praise you for a correct answer or help you fix a wrong one? Have you ever done schoolwork using a computer program that lets you know immediately if your answer is right or wrong? Has someone in your school ever used a behavior modification system? If you answered yes to any of those questions, you just might have B.F. Skinner to thank.

Skinner was born on March 20, 1904. His father was a lawyer, and his mother was a housewife. Later he had a younger brother at home, too. Skinner felt his childhood home was warm and stable.

As a child, Skinner enjoyed building things. Some of the things he made were a cart, a motion machine, and a cabin. He even built something to separate green berries from ripe berries when he had a job selling them. He also built a tool that helped the broom pick up dirt when he worked in a shoe store during high school.

Skinner went to Hamilton College. He planned to become a writer. He moved back home to write but did not get much done. He then moved to New York and worked in a bookstore. At the store, he had the chance to read works by Pavlov and Watson. He wanted to learn more about psychology.

At the age of 24, Skinner set out to do just that: learn more. He became a psychology student at Harvard University. He was told to try new things. There Skinner put his building skills to work studying rats. He took the time to create tool after tool for the rats. Skinner created the cumulative recorder to mark each response as a line that moved up. With these tools, his recordings of the rats' behavior showed that how fast the rats pressed the bar depended on what happened after the rats pressed the bars. Skinner called this "operant behavior." He called the way one would arrange the reinforcements to get a behavior "operant conditioning". He worked on studying the connection for five years and put them in his first book, The Behavior of Organisms in 1938.