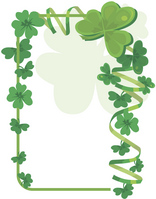 "S-s-say, Dad, do you know what month this is?" Seth hissed at his father.

Seth's father, Sam Serpent, was reading his newspaper. He looked up at his son. "No, S-s-seth, I do not," Mr. Serpent said. "Is it s-s-some kind of s-s-special month?"

"My teacher s-s-said it is Irish-American Heritage Month. We are going to have a party on March 17. We will all wear green. We will make shamrocks-s-s. We will read Irish fairy tales. Then we will have a big lunch. All the food will be Irish. All the s-s-students-s-s will bring s-s-something. I will take colcannon. What is colcannon, anyway?"

Mr. Serpent looked as if his head was going to explode. He was very angry. His eyes turned red. He waved his tail around.

"How dare they even think about Irish people? S-s-serpents-s-s do not like Irish people. And they do not like S-s-saint Patrick, either," he hissed. His tongue flicked out.

Mr. Serpent said, "A very long time ago there were many of us-s-s in Ireland. It was a very good place to live. There was plenty of food. There was lots-s-s of tall grass-s-s to hide in. S-s-serpents-s-s were very happy there. Then a man named S-s-saint Patrick came. He hated all s-s-snakes-s-s and s-s-serpents-s-s."