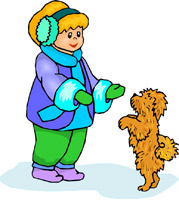 It all started on a cold winter day. Chester Greenwood walked to a pond. He was going to try out his new ice skates. The air was very cold. He ran home. He asked his grandma to help him. She gave him a scarf. It made his ears itch. Then, he had a better idea.

Chester invented the first earmuffs. He used beaver fur for the outside of the muff. He used black velvet for the inside. His grandma helped him sew it. Chester used wire to hold the muff pieces together. Chester called his invention the ear protector. It was a big hit. Kids all around the area wanted their parents to make one for them.

Chester knew his earmuffs could be better. He made some changes. He used flat spring steel for the band instead of wire. He attached a hinge to each muff. That made the muff fit tighter against the head. The earmuffs could be folded because he used the spring steel. He could put the muffs in his pocket.