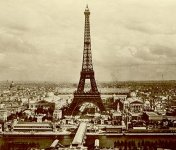 The Eiffel Tower is in France. It stands in the capital city. The capital of France is Paris. France is a country in Europe. It is known for buildings. It is famous for perfume. It is also known for cheese. About 350 kinds of cheese are made in France.

France is also known for a bike race. It takes place each summer. It is called the Tour de France. About 100 bike riders race. The race is 2,000 miles long.