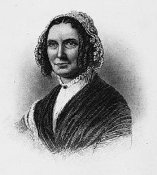 On March 13, 1798, Abigail Powers Fillmore was born. She was born in New York. Her father died when she was young. Her mother moved the family. They did not have a lot of money. They moved to a place where they could save money. Her mother taught the children at home. She used her husband's books. The children were very smart.

Abigail went on to another school. She became a teacher. She met Millard Fillmore. He was a lawyer. They were married. Abigail did not give up her teaching job. They had two children.

Millard became a congressman. A congressman helps make laws. Abigail stopped teaching. She liked to work in her flower garden. Her favorite thing to do was read. In 1849, Millard became the vice president of the United States. They moved to Washington, D.C.