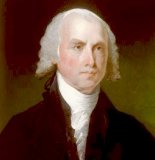 If you could have met James Madison and his wife, Dolley, you might have been surprised. You might have thought that he could not have been president of the United States. He was just 5 feet 4 inches tall and weighed 100 pounds. He was sickly and frail. He didn't feel comfortable in the company of other people. Dolley, on the other hand, was an attractive woman who was full of life. She was always considered to be the "life of the party." What kind of president could a man like Madison be?

James Madison was born in King George, Virginia. The year was 1751 and the date, March 16. His father was a wealthy man. He owned a tobacco plantation in Orange County, Virginia. Madison grew up on that plantation. When the time came for James to go to college, he chose to leave Virginia and attend the College of New Jersey. Today that college is known by the name of Princeton. Madison completed four years of work in just two years. He worked himself to the point of exhaustion to accomplish this feat.

James returned home to recuperate. It didn't take him long to jump into a political career. He served in the Virginia legislature from 1776 to 1779. He learned from Thomas Jefferson about politics.