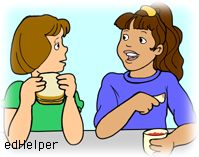 "Why does everything happen to me?"

Reva Alden's world had come crashing down. Still reeling from her parents' divorce, she had taken another hard blow with her mother's latest announcement.

Their house was up for sale, so Reva had known that they would have to move. She thought they would get a smaller house or an apartment somewhere in Pleasantville where all their friends and Reva's father lived. But, no. This move would take them 500 miles away from everything Reva had ever known! Worse yet, there was no chance of her mother and father getting back together with such a great distance between them.

"Your great-grandmother went to live in a nursing home, and her house is standing empty," Mrs. Alden told her grieving daughter. "We can live there for free and take care of the place. Grandma will feel better knowing we are taking care of her home." She paused while Reva complained. Then she took a deep breath and sternly said, "I can't afford anything else. Your father doesn't make enough money at his new job to make our house payment and pay the rent for his apartment, and I can't afford it by myself." Tears formed suddenly in her eyes. "I'm doing the best I can!"

Stunned, Reva waited until her mother hurried to her own bedroom and shut the door before she beat her pillow with her fist. "It's not fair!" she cried. There was a great big ache where her heart used to be. "It's not fair!" Hot tears streamed down her face, making her eyes swollen and her skin damp and itchy. Reva felt all alone in the world. She hated her parents. Everything was wrong, and it was all their fault. She would never be happy again.

Two weeks later, Reva was arranging her things in a small bedroom of an old house in a small town. She resented her father for causing them to move. She resented her mother for not trying harder to find a way to stay in Pleasantville. "I will never forgive them," she told herself as she arranged her collection of blue beanbag animals on her dresser. She stroked the blue seal that her best friend, Caitlin, had given her as a goodbye present. "Never."

She kept that promise. She hardly spoke to her mother. She refused to say much when her father called. She would make them suffer for what they had done. They would be sorry for ruining her life.

As for her new school, Reva didn't give it a chance, either. She didn't want to be there, and she didn't care who knew it. She ate alone at lunch, and she refused to join the band even though she had played the clarinet at her old school.

One day about two weeks after the move, an odd thing happened. The most popular girl in Reva's class, Sara Ann Miller, began to befriend her.

"Great outfit," Sara said with a friendly smile as they stood at the pencil sharpener.

"Great shot!" she called during gym class when Reva sank a basket from the free throw line.

"You're a true artist," she said enthusiastically after she saw Reva's drawing of a cardinal in art class.