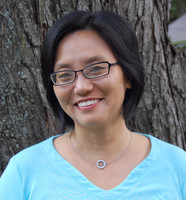 Linda Sue Park did not know a lot about her family's history. She knew that her parents were immigrants from Korea. They moved to the United States in the 1950s. Her parents thought it was best for the family to put their life in Korea in the past. They believed that to be successful meant becoming "very American." Only English was spoken in their home. They learned about America by reading books. It was not until Linda began research for a book that she learned about her family's heritage. Most of Park's books include some Korean history or tell about the Korean culture.

Linda Sue Park was born on March 25, 1960. She was born in Illinois, just outside of Chicago. When she was four years old, Linda began writing. When she was nine years old, she wrote a haiku. A haiku is a Japanese poem. It has three lines, each containing a certain amount of syllables. It was published in a children's magazine. She was paid a dollar for her work.

Linda gave the one dollar check to her dad for Christmas. He framed it and hung it over his desk. A year went by and Linda received a letter from the magazine. They asked her to cash her one dollar check. Linda wrote back. She explained what she did with the check. She asked if her dad could keep it. The magazine said yes. Her dad still has the check today.

Throughout elementary school and high school, Linda continued to write and publish her work. She went to Stanford University and graduated with a degree in English. She chose English so she could read and write all the time. From there she accepted a job as a writer for an oil company. That was not the kind of writing that she wanted to do, but she learned a lot. She learned how to present her work in a professional manner.