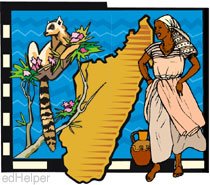 Do you like to be told what to do? If you're like most people, you probably don't. Why not? Is it because you think no one knows what's best for you besides you? Or is it just because you want to make your own choices? Not everyone in the world has the ability to make their own choices and their own rules. In fact, many people throughout history have had to fight for self-rule. This is true of the people of Madagascar.

Madagascar is an island off the southwest coast of Africa. It lies in the Indian Ocean. For most of its history, Madagascar and its people were unknown to the rest of the world. During those times, Madagascar's people lived in tribes, each with its own system of government. Then, in the 16th century, Europeans arrived in Madagascar. The island was an easy stopping place for European traders sailing between India and Europe.

While many Europeans came to Madagascar, only the French stayed. The French set up colonies all around Madagascar. Within a few hundred years, the French had taken control of Madagascar. The French government ruled Madagascar like a part of France. This process of ruling another faraway nation is called colonization.