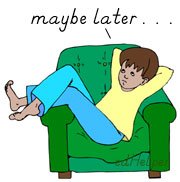 When Aldric Verdell was born, nobody knew that something in his character was missing. It wasn't until he was old enough to attend school that it became evident. Aldric lacked ambition.

"Shouldn't you be studying for the math test?"

"Maybe later," Aldric would say. He put off studying and was never well-prepared for his tests. His lack of effort was apparent by the grades he received.