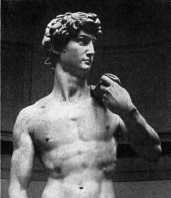 Michelangelo Buonarroti Simoni, usually known simply as Michelangelo, [my-kuhl-AN-juh-loh] was a gifted artist. He was a master sculptor, a painter, an architect, and a poet. Known as a leader of the Italian Renaissance [ren-uh-ZAHNS], Michelangelo was one of the most famous artists who ever lived.

He was born on March 6, 1475, in the small village of Caprese in Italy. When he was only a few months old, his family moved to Florence, which was one of the largest cities in Europe. He barely knew his mother. Due to her long illness and death when he was only six years old, he lived with a foster family until he was ten years old. The young boy showed no interest in the family business of banking or in school. Instead, he slipped away to copy the paintings he saw in churches and to talk with artists. At the age of thirteen, he was apprenticed to a master painter.

Michelangelo studied human anatomy by examining dead people's bodies. His goal was to learn how to make his sculptures and paintings look more realistic by learning about muscles, veins, and joints. However, his contact with corpses caused him some health problems. Handling diseased bodies was not a healthy activity to pursue.

One of Michelangelo's most famous sculptures is the Pieta [pea-A-TAH] (Italian for pity) in Rome. He was only 23 years old when he carved Christ lying across the lap of Mary, who is mourning his death. Nearly all of Michelangelo's work was of a religious nature due to the large market for it. He carved it so that both mother and son look young. Surprisingly, Michelangelo did something he never did to any other sculpture; he carved his name in the sash across Mary's chest! He did that because some people didn't believe that he could have created such a great work of art. Later he regretted the burst of pride that led him to do such a thing, and he vowed not to sign any future creations.

Giorgio Vasari [JAWR-jaw vuh-ZAHR-ee ], in his book Lives of the Artists, first published in 1550, said of Michelangelo's Pieta: "The lovely expression of the head, the harmony in the joints and attachments of the arms, legs, and trunk, and the fine tracery of the veins are all so wonderful that it is hard to believe that the hand of an artist could have executed this inspired and admirable work so perfectly and in so short a time."