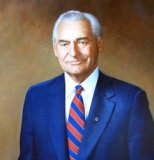 You couldn't find a more perfect picture of the American Dream. Sam Walton was born in 1918 to a struggling Oklahoma farm family. He put himself through college during the Great Depression. He worked hard and developed new ideas. By 1982, he was the richest man in America!

From an early age, Sam was a classic overachiever. Growing up in Missouri, he became the youngest Eagle Scout in state history. He was an honors student in high school. He also played basketball and football and was a leader in student government.

Sam managed all this while working two jobs to help feed his family. He was chief milker, bottle washer, and delivery man for their family (one cow) dairy business. He also had a paper route. No wonder that during his senior year, his class voted him "Most Versatile Boy."

In college, it was more of the same. Working several odd jobs to support his schooling, Walton earned a degree in economics. At the same time, he was an officer in ROTC and active in a fraternity. He served in student government and led a Sunday school class on weekends. During his college years, he was a member of the national military honor society.

Walton graduated with the class of 1940. Right away, he embarked on his retail sales career. He signed on as a management trainee at J.C. Penney. In 1942, Walton quit his job. The U.S. had entered WWII. Sam Walton expected a call from Uncle Sam.