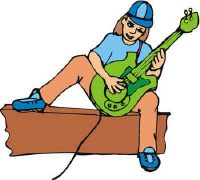 Marquis deGarmo sat on his bed and strummed his guitar thoughtfully. He had composed a new tune. It had a ballad feel to it. Now he needed some lyrics to go with it. Unfortunately, his brain was devoid of ideas. Though his creative juices had been flowing earlier at basketball practice, the moment his fingers touched his guitar strings, all those juices had dried up.

His scuffed sneakers lay on the floor where he had kicked them off. The ragged, limp laces made squiggly lines on the beige carpet. Marquis studied them for a moment and then sang, "Shoe laces, shoe laces, frayed ends just dragging the ground. Most of the time you're just hanging around . . ." What else could he say about shoe laces? Then he thought, "Who cares about shoe laces, anyway?"

He rubbed his jaw, felt a zit, and scratched at it as he searched his mind for inspiration. He glanced around the room. His gaze fell on the dresser mirror. His image was reflected in a slouch. He sat up straight, stuck out his chest, and contemplated his improved reflection. "This mirror, this mirror, the one hanging here on the wall . . ." he sang. He stopped. Who did he think he was - Snow White's evil stepmother? Gross!

He tried to think of some of his favorite pastimes for inspiration. After trying to write songs about basketball, his CD player, and video games, Marquis gave up. All that work made his mouth dry. He headed to the kitchen to quench his thirst.

Medina was on the phone, yammering about some girl to one of her friends. Marquis was amazed at how long his sister could talk about nothing. As he passed by, he heard her say, "You know Sasha; she's funny that way."

"She's funny that way" stayed in Marquis' head as he grabbed the vivid orange mug he had used earlier and ran water in it to clean out the milk residue. The statement echoed in his mind as he took a 2-liter cola from the refrigerator and poured himself a fizzy mug of refreshment. He turned it over in his thoughts as he sipped his drink and wandered back to his room with an idea.

He grabbed a pen and paper and began to write down the first draft of the song. Later he would edit it, making sure the words worked with the melody. For now, he looked over the words. Satisfied with his creative effort, he reached for his guitar. He strummed the tune and sang along.

What would I do