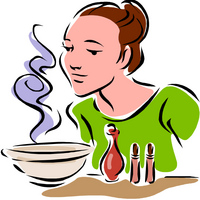 "Hmmmm...." Sonja sighed with pleasure as she walked into her favorite store, Super Scents. She never got tired of visiting this place. It always smelled so good! Today, the store smelled of vanilla nut. She felt like she was walking into a kitchen with rolls baking in the oven!

"Good afternoon, Sonja!" Mrs. Hess said. She was getting used to Sonja stopping in after school. "How'd your day go?"

"It went pretty well," Sonja answered. "I had a history test and a math test on the same day, so I'm a little tired."

"I know just what will pick you up," Mrs. Hess said. She walked over to the opposite wall of the store. "Come here and take a whiff of this."

Sonja strolled over and took the candle Mrs. Hess offered. It was a peppermint-scented candle and Sonja sniffed it. She began to feel herself waking up.

"Interesting!" she said. "I do feel like that could give me a little energy. It's amazing what a scent can do!"

"Yes," Mrs. Hess agreed. "Some people use scents to help them deal with different issues. The idea of using scents to promote health and affect our mood is called 'aromatherapy.' Scents can be used for all sorts of situations. For example, if you feel like relaxing, take a whiff of this." Mrs. Hess held up a vial of oil with the scent of lavender.

"Ummm." Sonja could feel her body going back to the feeling of sleepiness.

Mrs. Hess continued. "Some folks spray a little bit of lavender on their pillows at night. It helps them sleep better."