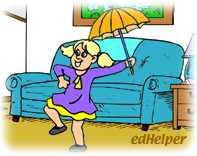 Lisha finished sewing the button on her blouse. She bit the end of the thread and tied it off. As she packed up the sewing kit, her sister, Kali, came dancing into the room with a bright orange umbrella opened above her head. "Tra la la la," she sang as she twirled around in circles.

Lisha stared horrified at her sister. "What are you doing?" she exclaimed as she jumped out of her chair and grabbed the umbrella out of Kali's hands.

Lisha closed the umbrella. "Don't you know it's bad luck to open an umbrella in the house?"

"There's no such thing as bad luck. Now give me back my umbrella!" Kali cried, grabbing the umbrella from Lisha.

"Mom!" Kali called as she tried to pull the umbrella away from her sister.

"What is all the commotion?" said Mom as she came into the room. "Oh my!" she exclaimed when she saw the girls having a tug-of-war with the umbrella. Mom stood between the girls and put her hand on the umbrella. "Let go."

The girls let go and stepped back, folding their arms across their chests.

Mom put the umbrella down on the table. "Who would like to tell me what is going on?"

Both girls started to explain what had happened. Mom interrupted. "Stop. Kali, you tell me first."