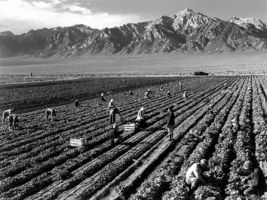 The Life of Cesar Chavez, Part 2

When Cesar was fifteen years old, he quit school to work in the fields full time. He worked long hours for little pay. Sometimes the workers were cheated by farm owners or labor contractors.

Sometimes labor contractors hired too many workers to do a job. Then the pay they had been offered for doing the job was cut for all workers. Workers had to accept lower pay or lose their jobs. Other workers were willing to do it because they had no jobs, and some pay was better than none at all. If workers were paid by the pound for what they picked, often the scales were set to under-weigh the produce. Cesar and his family had a hard time paying for food, clothing, and a place to live. Cesar wanted a better life.

When he was seventeen, Cesar joined the U.S. Navy. World War II was still going on. He hoped to learn skills in the Navy that would help him get a better job later. But even in the Navy there was unfairness. Mexican-Americans were only given jobs as painters or deckhands. Cesar's job was cleaning the ship's deck. He said later that his time in the Navy was the worst two years of his life.