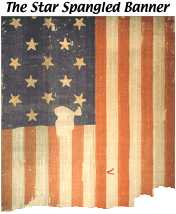 When the opening strains of the American national anthem begin, people come to their feet and put their hands over their hearts. It's a difficult melody, but the lyrics paint a picture of the struggle for freedom. That is the power of "The Star-Spangled Banner."

During the War of 1812, Americans raided and burned the town of York (now Toronto) and Fort York in Upper Canada. In response, the British burned Washington, D.C.

After the attack on Washington, D.C., the people of Baltimore, Maryland, were afraid they would be next. During the summer of 1813, the commander of Fort McHenry had a huge flag made. He wanted it to be so big that "the British would have no trouble seeing it from a distance."

After the attack on Washington in the summer of 1814, Francis Scott Key got word that a beloved elderly doctor, William Beanes, was being held prisoner aboard the British flagship Tonnant. Many people feared the old man would be hanged. Key and Col. John Skinner sailed out to the British fleet under a flag of truce to arrange the doctor's release.

At first, the British officers refused to release the elderly doctor. Finally, they relented, but refused to allow the Americans to leave until after the planned attack.

To keep the British from coming too close to shore with their ships, the Americans had sunk 22 ships to make a barrier near the fort. Early in the morning on September 13, 1814, the British began to bombard the fort. The attack continued for 25 hours. During that time, they fired 1,500 bomb shells, each weighing 220 pounds. The shells sometimes exploded before hitting their targets. Smaller specialized ships shot the new Congreve rockets. Their distinctive red flame zigzagged as the rockets shot across the night sky.

For a time in the evening they stopped, but they started again at 1:00 A.M. The three Americans watched the battle tensely. As long as the noise continued, they knew the fort had not surrendered. Just before dawn, the British abandoned the attack and retreated. Key, Skinner, and Beanes did not know what was happening. When dawn came, they were overjoyed to see the big flag still flying!

Key was inspired to write a poem about the flag. He pulled a letter from his pocket and began to write on the back. He finished at his hotel later that day. His brother-in-law had it printed and distributed copies with the title "Defense of Fort McHenry." Within a week, the poem was printed in the Baltimore newspaper. After the verses was a note that it could be sung to the tune of "Anacreon in Heaven." A month later, it was sung in public under the name, "The Star-Spangled Banner."

The poem became a very popular patriotic song. Then on March 3, 1931, the song was officially adopted as the national anthem for the United States of America.