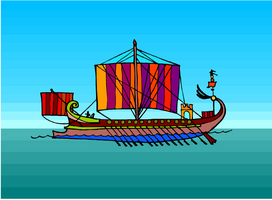 The Tale of Patricius: Voyage, Part 1

Patricius dozed. The rocking of the vessel lulled his mind to sleep in spite of the fear and excitement from the raid. For a moment, he didn't remember where he was or why he was so uncomfortable. Then he remembered the attack and his ignominious capture. What was going to happen to him now?

He roused when one of the slavers used his foot to wake him. Water was offered with a ladle. The boy didn't realize how thirsty he had been and drank greedily. His hands were still tied behind his back, and he could not resist when the water was withdrawn sooner than he wished.

It was just a few minutes later that Gobha, the leader of the slavers, approached with some of his men. He was a wiry man of medium height, and he and his men were impersonal in their gaze. Patricius realized that they saw him and the others as little more than animals. In their arms, they carried shackles.

After all their effort in catching and transporting their captives, it wouldn't do to have them escape before they could be sold and the profit taken.

One by one, each of the captives was shackled around their ankles. Weeping and moaning became the predominant sound as their lives of freedom were choked out with bands of iron.

Patricius bit his lips to keep from uttering any sounds as his ankles were roughly grasped, the shackles applied and locked in place. Then the bonds on his wrists were loosened for just a moment, only to be replaced with iron bracelets. At least his hands were in front of him this time.

The boy looked skyward. The sun was now low on the horizon. Chunks of bread were handed out to the captives. Some could not eat due to the rocking of the ship.

As darkness settled over the ship, the slavers gathered near the bow to enjoy their meal. Torches lit and fixed to the sides of the ship afforded light, and the men entertained themselves with dice and gambling. Their laughing was in stark contrast to the mood of those huddled in the stern.