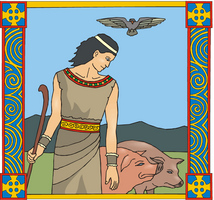 The Tale of Patrick: Exile

Patrick sat on the side of the mountain watching the herd of swine that were scattered over the area in front of him. Most were red, the color of the tiles on the roof of his parents' home.

It had been almost six years since he had been caught in the slavers' raid. He had grown from a youth into his manhood. No longer thin, he had added breadth to his shoulders and arms. His legs were tanned and well-muscled.

Patrick wished he had been sold to a decent master. Milchu of the Dalraida had his rath, or fort, right on the side of Mount Slemish. It overlooked valley Braid, and nothing could move without being marked by a lookout.

The swine contentedly rooted their noses in the rocky soil, looking for worms, grubs, or plant tidbits with which to fill their bellies. They grunted soft conversations to one another as they worked.

As they worked the ground with their noses, they fertilized it with their other end. The grass would soon be even better on these slopes, and the shepherds would bring the sheep and cattle to graze on the improved land.

Patrick never forgot his home, but he had taken time to re-evaluate his father's teaching. The tales he'd heard as a child regarding the druids were far from correct. Patrick had expected to see wild-eyed men who went about casting spells and offering human sacrifices on hills at every full moon. He'd been particularly frightened when he'd learned that his new master was one of those druids. It took time for him to realize that just because a man was a druid didn't mean that he was a priest. All the doctors, lawyers, teachers, and others in the professional class, or the intelligencia, were druids.

Patrick's master, Milchu, had studied as a lawyer. Then he had been chosen to be tanist, or heir, to the chiefdom by a gathering of relatives. They thought that his knowledge of the law would help him be the best leader for his people. So far, since succeeding to his position he had done well, though he was a hard taskmaster. Everyone spoke of him with respect that was tinged with fear. Milchu's attitudes were only tempered with the knowledge that he could be removed if his family chose to do so.

Although he was a slave and without any rights in Irish society, Patrick was content with his life for the most part. He was not badly treated, and the pigs made interesting companions. Most of all, he had time to think and meditate.