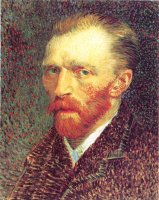 Vincent van Gogh is one of the greatest artists of all time. Some of his paintings carry a hefty price tag of nearly 100 million dollars. And a museum dedicated to his works in Amsterdam is a must-see for tourists. Brilliant as he was, van Gogh actually never lived a day as a celebrity. His fame came posthumously.

Van Gogh was born in the Netherlands (or Holland) on March 30, 1853. His full name was Vincent Willem van Gogh. As the second of six children, van Gogh had two brothers and three sisters. Among them, he favored his younger brother, Theodorus (Theo), the most.

Growing up, van Gogh was uninterested in drawings and paintings. But that changed after he joined a company called Goupli & Cie in 1869 and became an art dealer there. As an art dealer, van Gogh had ample opportunities to visit or work with galleries and museums. It broadened his perspectives and made him appreciate works of art. Yet, despite his newfound interest in drawings and paintings, van Gogh slowly lost interest in his job. In spring 1876, he was dismissed by Goupli & Cie. The news did not upset him, for he had decided that he would follow in his father's footsteps. He wanted to become a clergyman.