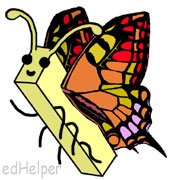 "Hey, toss me the margarine," Stephen said to his sister, Mary. Mary and Stephen were working on their first batch of cookies without Mom's help. She was in the next room working on the computer, just in case!

"No. I wanted to create an insect," Stephen said with a grin.

"You make no sense, Stephen." Mary slid the margarine over to him.

"You should have tossed it," Stephen said laughing, "Then we would have had a butter-fly!"

Mary rolled her eyes. Her brother was a constant joker. At least he was not boring.

"What do you know about butterflies, anyway?" she asked, as she poured the sugar into the bowl.

"I know they flit around. Some are pretty," he answered.

Mary looked at him smugly. "I just did a report on butterflies, and I'll bet I know more than you."

"For example," Mary went on, ignoring him as she filled a cup with water. "Do you know what a lepidopterist is?"

Mary stopped and stared at him. "No. It's a person who studies moths and butterflies."