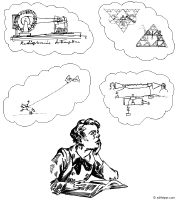 Aleck Bell lay in his yard and stared at the night sky. "Tomorrow, I go to London," he said aloud. He was very excited. For a long time, he had dreamed about going to London. He wondered what it would be like in the big city. He would miss his home here in Scotland. He would miss his family. Yet, he could hardly wait to leave.

Aleck rose and took one last look around him. "Coming."

The next day Alexander Graham Bell boarded a train for London. It was a long trip. When he arrived, his grandfather met him at the station. "Are those the best clothes you have?"

"Well, they will not do at all. My tailor will have to make you a new suit," said his grandfather.

Aleck got a new suit. His grandfather threw his old clothes away. The stiff, tight outfit was awful, but now it was all he had. Aleck went to show his grandfather his suit.

"It's a little stiff," Aleck said.

"You'll get used to it. Tomorrow we start your lessons. You are here to learn Greek and Latin. It will help you to teach speech like your father," his grandfather said.

"Do I really need to learn Greek and Latin, Grandfather? I want to be a musician," said Aleck.

"Nonsense. You are going to teach speech, just as I did and as your father does now. We start your lessons in the morning."